Water layering is intensifying significantly in about 40% of the world's oceans, which could have an impact on the marine food chain. The finding, published in the Journal of Geophysical Research: Oceans, could be linked to global warming.

Upper-ocean stratification is the presence of water layers of varying densities scattered between the ocean's surface and a depth of 200 metres. Density describes how tightly water is packed within a given volume and is affected by water temperature, salinity and depth. More dense water layers lie beneath less dense ones.

Ocean water density plays a vital role in ocean currents, heat circulation, and in bringing vital nutrients to the surface from deeper waters. The more significant the stratification in the upper ocean, the larger the barrier between the relatively warm, nutrient-depleted surface, and the relatively cool, nutrient-rich, deeper waters. More intense stratification could mean that microscopic photosynthetic organisms called phytoplankton that live near the ocean's surface won't get the nutrients they need to survive, affecting the rest of the marine food chain.

Scientists think that global warming could be increasing upper ocean stratification, but investigations have been limited and have usually used short-term data, leading to a large degree of uncertainty. Suga and Yamaguchi compiled temperature and salinity data from the World Ocean Database 2013, covering the period from 1960 to 2017. They then used mathematical equations to calculate the difference in temperature and salinity content between 10 and 200 metres in the regions where data was available. 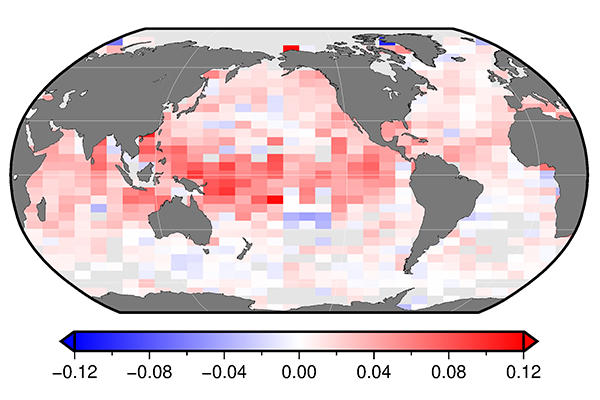 Upper ocean stratification has been strengthening in a large part of the global ocean since the 1960s. Color shows trends in density difference between the surface and 200-m depth (unit: kg m-3/decade). ©Ryohei Yamaguchi


They found that around 40% of the world's oceans are witnessing a rise in upper ocean density stratification. Half of this rise is happening in tropical waters. They also found that rising stratification in mid-latitude and high-latitude oceans of the Northern Hemisphere varied seasonally, with faster changes happening in the summer compared to winter months.

Additionally, inter-annual variations in several regions correlated with climatic events, such as the Pacific Decadal Oscillation, the North Atlantic Oscillation and El Niño. This suggests that changes in density stratification could be a key factor explaining how large-scale atmospheric changes impact biogeochemical processes, the researchers say.

Suga and Yamaguchi note further studies are needed to confirm this link. But for this to happen, continued international corroborative efforts are needed to gather global, long-term temperature and salinity data across various upper-ocean depths.