TOP > News > The Connectivity of Multicomponent Fluids in Subduction Zones

The Connectivity of Multicomponent Fluids in Subduction Zones

A team of researchers has discovered more about the grain-scale fluid connectivity beneath the earth's surface, shedding new light on fluid circulation and seismic velocity anomalies in subduction zones.

Lithospheric plates collide at convergent boundaries. Here, the less dense oceanic lithosphere subducts below the continental plate, and releases an abundance of water due to a progressive metamorphic reaction at high pressure and high temperature. The released water can infiltrate into the mantle wedge which lies between the subducting oceanic lithosphere and the continental crust.

Fluids that circulate in subduction zones have a significant effect on magma genesis, global material exchange between the Earth's interior and surface, and seismicity. The dihedral angle (θ)--the angle between two intersecting planes--holds the key to revealing the fluid connectivity and migration regime for a fluid-bearing, deep-seated rock in the Earth's interior known as pyrolite--a rock mainly composed of olivine.

Although H2O is the predominant composition of subduction-zone fluids, minor components in the fluid can have a dramatic impact on the wetting properties of olivine. This is evidenced in the dihedral angle between olivine and fluid.

Salt (NaCl) and non-polarized gases such as CO2 are two crucial components of subduction-zone fluids that significantly affect the dihedral angle between olivine and fluid. CO2 is known to increase the olivine-fluid θ under conditions in which the olivine does not react with CO2. Whereas, a recent study showed that NaCl can effectively decrease the olivine-fluid θ even with a low NaCl concentration. NaCl and CO2 have opposite effects on the olivine-fluid θ, and this factor has inhibited researchers in their understanding of fluid migration in subduction zones.

Clarifying the competing effects of NaCl and CO2 on θ in an olivine + multicomponent (H2O-CO2-NaCl) fluid system can help researchers understand the connectivity of aqueous fluid with more realistic compositions of the mantle wedge; thus making mapping of fluid distribution easier.

To do this, doctoral student Yongsheng Huang, professor Michihiko Nakamura, and postdoctoral researcher Takayuki Nakatani from Tohoku University worked alongside professor Catherine McCammon from the University of Bayreuth. The research team sought to constrain θ in olivine + H2O-CO2 fluid and olivine + H2O-CO2-NaCl (multicomponent) fluid systems at 1-4 GPa and 800-1100 °C.

The results in the H2O-CO2 system showed that CO2 tends to increase θ at 1 GPa and 800-1100 °C and at 2 GPa and 1100 °C. In contrast, CO2 reduced the θ to below 60° at relatively high-pressure and low-temperature conditions. Here, the olivine partly reacts with CO2 to form magnesite and orthopyroxene (opx). 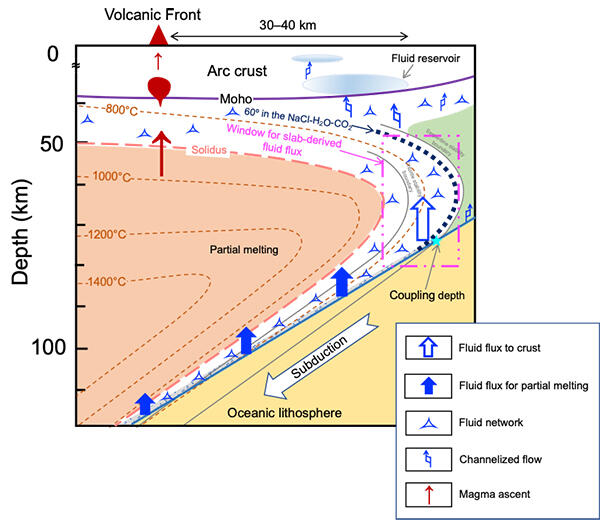