A team of researchers understands more about the melting of the Greenland ice sheet. They discovered a flow of hot rocks, known as a mantle plume, rising from the core-mantle boundary beneath central Greenland that melts the ice from below.

The results of their two-part study were published in the Journal of Geophysical Research.

"Knowledge about the Greenland plume will bolster our understanding of volcanic activities in these regions and the problematic issue of global sea-level rising caused by the melting of the Greenland ice sheet," said Dr. Genti Toyokuni, co-author of the studies.

The North Atlantic region is awash with geothermal activity. Iceland and Jan Mayen contain active volcanoes with their own distinct mantle plumes, whilst Svalbard - a Norwegian archipelago in the Arctic Ocean - is a geothermal area. However, the origin of these activities and their interconnectedness has largely been unexplored.

The research team discovered that the Greenland plume rose from the core-mantle boundary to the mantle transition zone beneath Greenland. The plume also has two branches in the lower mantle that feed into other plumes in the region, supplying heat to active regions in Iceland and Jan Mayen and the geothermal area in Svalbard. 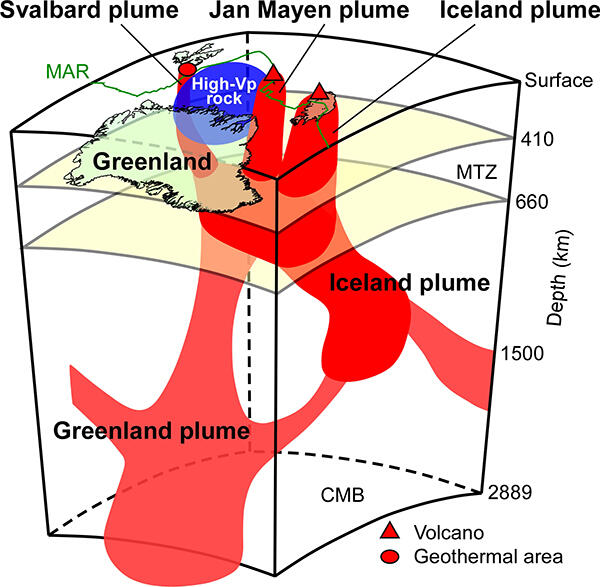 
Their findings were based on measurements of the 3-D seismic velocity structure of the crust and whole mantle beneath these regions. To obtain the measurements, they used seismic topography. Numerous seismic wave arrival times were inverted to obtain 3-D images of the underground structure. The method works similarly to a CT scan of the human body.

Toyokuni was able to utilize seismographs he installed on the Greenland ice sheet as part of the Greenland Ice Sheet Monitoring Network. Set up in 2009, the project sees the collaboration of researchers from 11 countries. The US-Japan joint team is primarily responsible for the construction and maintenance of the three seismic stations on the ice sheet. 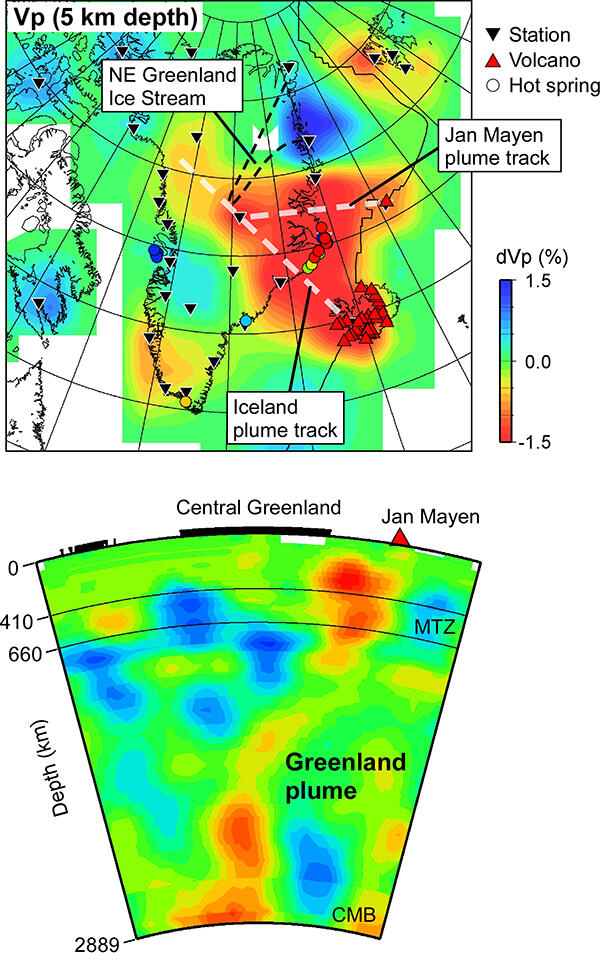 A map view of P wave velocity tomography at 5 km depth beneath Greenland and surrounding regions (left). Blue and red colors denote high and low velocity perturbations, respectively, whose scale (in %) is shown beside the map. The white dotted lines are the thermal tracks of Iceland and Jan Mayen plumes that are affected by the Greenland plume. The area surrounded by the black dotted lines is where the flow, caused by melting at the bottom of the ice sheets, exists (Northeast Greenland Ice Stream); its water source is located at the intersection of the two heat tracks. A vertical cross-section of whole-mantle tomography passing through central Greenland and Jan Mayen (right). We can see that the Greenland plume is the heat source for the Jan Mayen volcano. ©Tohoku University


Looking ahead, Toyokuni hopes to explore the thermal process in more detail. "This study revealed the larger picture, so examining the plumes at a more localized level will reveal more information."