The concentration of the radioactive element radon is known to change in the ground before and after earthquakes. Previous studies have shown elevated radon levels in the atmosphere before the mainshock of a large inland earthquake due to foreshock activity and slow slip.

But now, researchers from Tohoku University have revealed an anomaly in this phenomenon. Through the analysis of data before and after the 2018 Northern Osaka Earthquake, they discovered that the atmospheric radon concentration decreased.

The results of their research were published online in Scientific Reports on April 2, 2021.

Observation in atmospheric radon concentration levels from the Osaka Medical and Pharmaceutical University showed a decrease about one year before the earthquake, a trend that continued until June 2020. Seismic activity in the vicinity of the monitoring site also declined prior to the earthquake along with a reduced seismic activity after the mainshock for the entire Kansai region, excluding the aftershock area.

All of this suggests that radon levels did not increase after the earthquake. It also paints a more complicated picture of the radon and fluid movements that cause radon exhalation in the subsurface when large earthquakes occur.

"The discovery revealed that more processes are occurring before earthquakes than previously thought," said Muto. "Further analysis of other earthquakes will lead to a better understanding of the physiochemical processes at play and help us use atmospheric radon concentrations to clarify various crustal movements correlated with major earthquakes."

Expansion of the monitoring network will help clarify the area and timing of radon anomalies, the geological characteristics that cause such anomalies, and the relationship with the different earthquake types. All of this will help realize a radon-based earthquake prediction system. 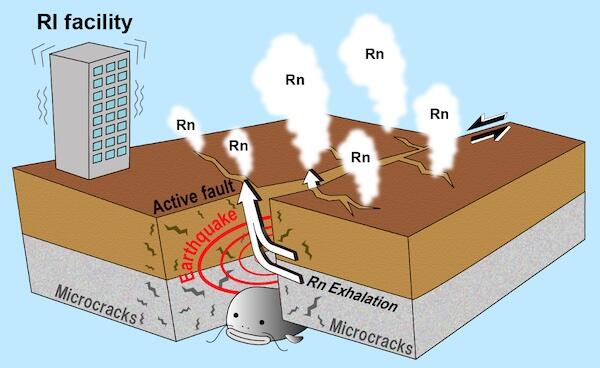 Image showing the exhalation of radon (222Rn) gas from underground. The concentration of radon in the atmosphere is measured at radioisotope (RI) facilities. Radon exhalates to the ground surface through microcracks (fissures) in the rock that occur before and after earthquakes.