An international team may have taken the first step toward realizing the control needed to induce superconductivity at room temperature. They published their findings on Oct. 7 in Nature Communications.

Led by Takafumi Sato, professor in the Advanced Institute for Materials Research (WPI-AIMR), Tohoku University, the researchers examined a transition metal dichalcogenide made of one tantalum atom and two selenium atoms (1T-TaSe2). This type of metal is atomically thin and exhibits the strange characteristic of transitioning from metal to nonmetal in condensed matter. Its atomic and electron interactions can be manipulated to move it from an electrically conductive material to an electrically resistive one, called a Mott insulator.

"The interplay among electron correlation, dimensionality, and appearance of various quantum phases is a long-standing issue in condensed-matter physics," Sato said, noting that Mott physics and superconductivity appear to be directly related, but experimental exploration has been difficult.

Mott insulators have strong interactions between their electrons. Known as the Coulomb force, these interactions exceed the bandwidth between electrons and atoms in partially filled systems. In 1T-TaSe2, this exotic behavior can be boosted by a charge-density wave, which consists of highly organized, flowing electrons capable of conductivity.

"To functionalize such a complex phase - a two-dimensional charge-density wave in a Mott insulator - it is essential to enhance the transition temperature," Sato said.

Using spectroscopy techniques to examine how the energies and movement shift in the material, the researchers found that the extremely thin insulator appeared to rearrange its components into a Star of David formation. The arrangement, the result of the target complex phase, appeared to depend on control over bandwidths by creating stronger interactions between electrons to hold them in a more ordered fashion. More critically, according to Sato, the arrangement also appeared to withstand higher temperatures and specific attempts to excite the particles into a different organization. 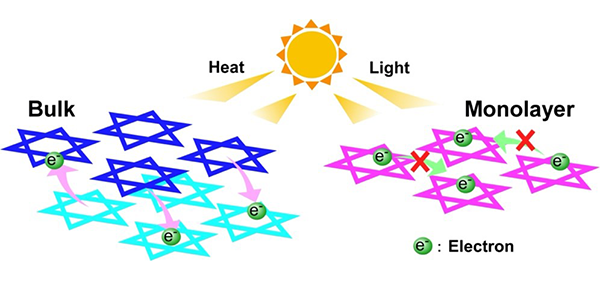 Schematics of electron hopping in bulk and monolayer materials. Mott insulaing phase of bulk materials can be easily converted to the metallic phase by heating and light shining due to the electron hopping between adjacent layers. On the other hand, monolayer materials are very robust against these perturbations because the interlayer hopping is intrinsically absent. © Takafumi Sato et al

The researchers also examined the complex Mott insulator phase in a different monolayer transition metal dichalcogenide, this one made of one niobium atom and two selenium atoms. They found that this one's typical lattice arrangement was also distorted into a Start of David arrangement by reducing the interlayer hopping of electrons.

According to Sato, while the complex phase commenced at incredibly cold temperatures, it appeared to persist as the material was heated, all the way to 450 Kelvin, which is significantly hotter than room temperature.

Next, the researchers plan to better control the complex phase by external means, such as an electric field, as well as search for similar exotic quantum properties in other transition metals.

"This work is only possible because of our international collaboration among Taiwan, China and Japan," Sato said. "Such collaboration, including the combination of our various spectroscopic techniques, played an essential role for our discovery."