Since early 2020, governments across the globe have grappled with preventing the spread of COVID-19 and insulating the economic impacts of this deadly virus. Debates have raged over how to balance stringent infection controls and maintaining a sense of economic normalcy.

Now, Tsuyoshi Hondou, an associate professor at Tohoku University's Graduate School of Science, has used theories of thermodynamics to generate a new concept termed "economic irreversibility." It contends that delaying infection control measures is more expensive in the long run.

The details of his research were published in the Journal of the Physical Society of Japan on October 18, 2021.

"Whilst some economists utilized a cost-benefit analysis to argue for timely intervention, its universal applicability remains questionable," says Hondou. "Previous studies have investigated specific situations with given parameters."

To develop a more universal guiding principle, Hondou turned to his experience in thermodynamics.

A cost benefit analysis is an optimization problem similar to exploring more efficient thermal cycles in thermodynamics. The benefit and the cost are the reduction of infected population, and the economic damage cause by the countermeasure, respectively. Hondou compared the efficiency of countermeasure processes with the same period in which the initial and the final infection status (the number of infected persons) are the same.

Moreover, the study did not require adjusting for different infectious diseases or social-economic conditions, making it applicable on a wider scale. "The result of our study can be applied to the current COVID- pandemic or future ones. It is even applicable to other social phenomena under similar mathematic structures." added Hondou. 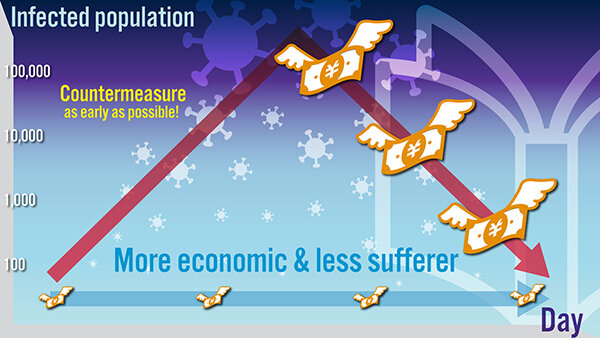 (Image 1): The earlier we take rational countermeasures, the less economic damage and infected population occurs during a pandemic wave.