Researchers in Japan, Sweden, and the US have unearthed evidence that low volcanic temperatures led to the fourth mass extinction, enabling dinosaurs to flourish during the Jurassic period.

Large volcanic eruptions create climatic fluctuations, ushering in evolutionary changes. Yet it is the volcanic temperature of the eruption that determines whether the climate cools or warms.

Since the emergence of early animals, five mass extinctions have taken place. The fourth mass extinction occurred at the end of the Triassic Period--roughly 201 million years ago. This mass extinction saw many marine and land animals go extinct, especially large-body, crocodilian-line reptiles known as pseudosuchia. Approximately 60-70% of animal species disappeared. As a result, small bodied dinosaurs were able to grow and prosper.

Scientists think the fourth was triggered by the eruptions in the Central Atlantic Magmatic Province--one of the largest regions of volcanic rock. But the correlation between the eruption and mass extinction has not yet been clarified. 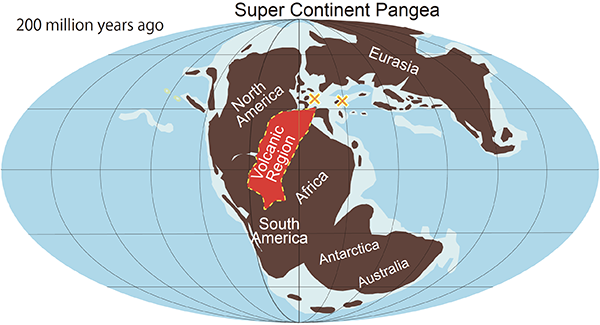 The SO2 gas was distributed throughout the stratosphere, converting to sulfuric acid aerosols. The instantaneous increase of global albedo caused short-term cooling, which could have contributed to the mass extinction.

Kaiho and his team took marine sedimentary rock samples from Austria and the United Kingdom and analyzed the organic molecules and mercury (Hg) in them. They found four discrete benzo[e]pyrene + benzo[ghi]perylene + coronene -Hg enrichments.

The discovery of low coronene in the first enrichment was particularly revealing. The second, third, and fifth mass extinction had high coronene concentrations. A low concentration indicates that low temperature heating caused high SO2 release and global cooling. 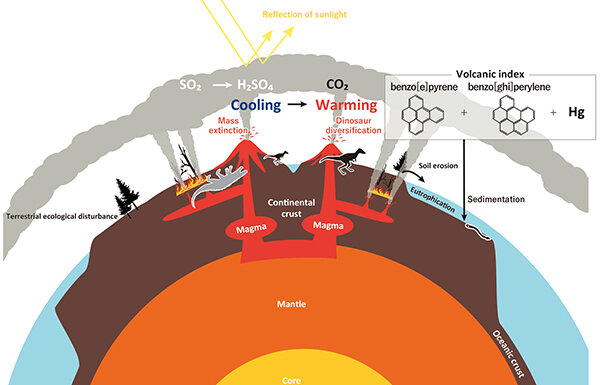 
"We believe the extinction was the product of large volcanic eruptions because the benzo[e]pyrene + benzo[ghi]perylene + coronene anomaly could only be seen around the time frame of the mass extinctions," said Kaiho.

Kaiho's team is now studying other mass extinctions with the hopes of further understanding the cause and processes behind them.